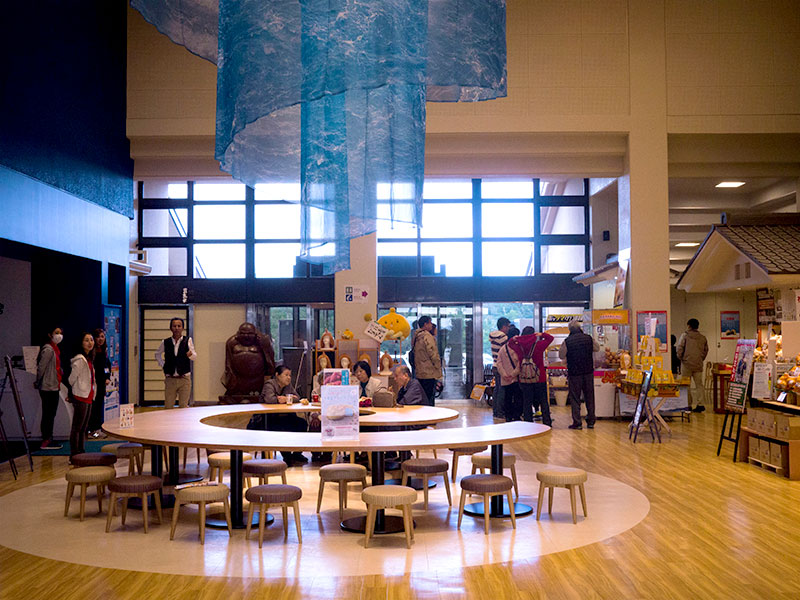 The interior design of the Hall includes many famous, regional motifs such as the Naruto swirl, seen here in the twist of the curtain and the curve of the table. 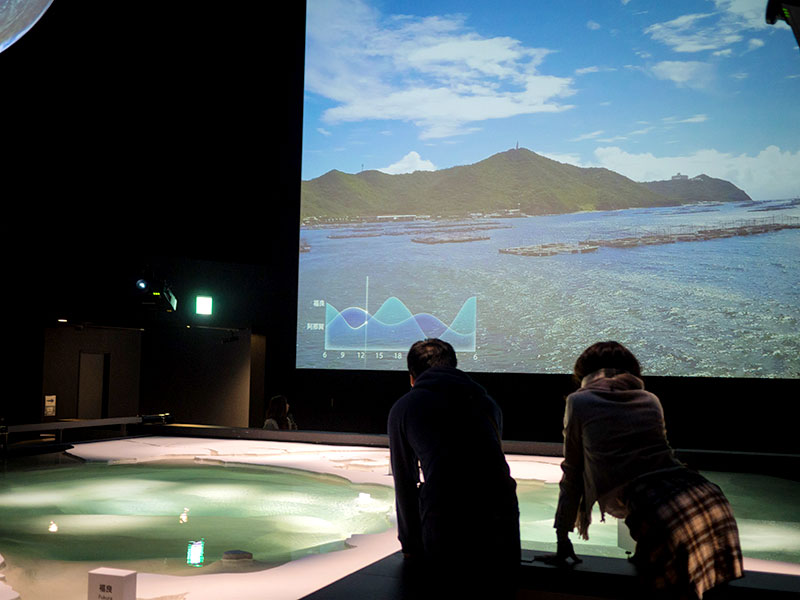 Visitors inside the movie theatre take a closer look at the scale representation of the Naruto bridge and whirlpools. 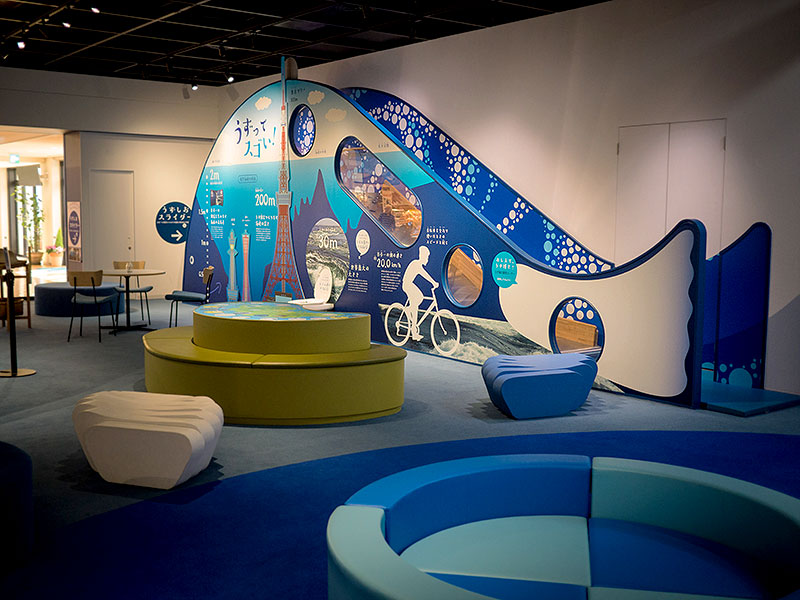 A fun play area for kids that also incorporates science! How deep is this bay anyway? Read about it, and then go down the slide! 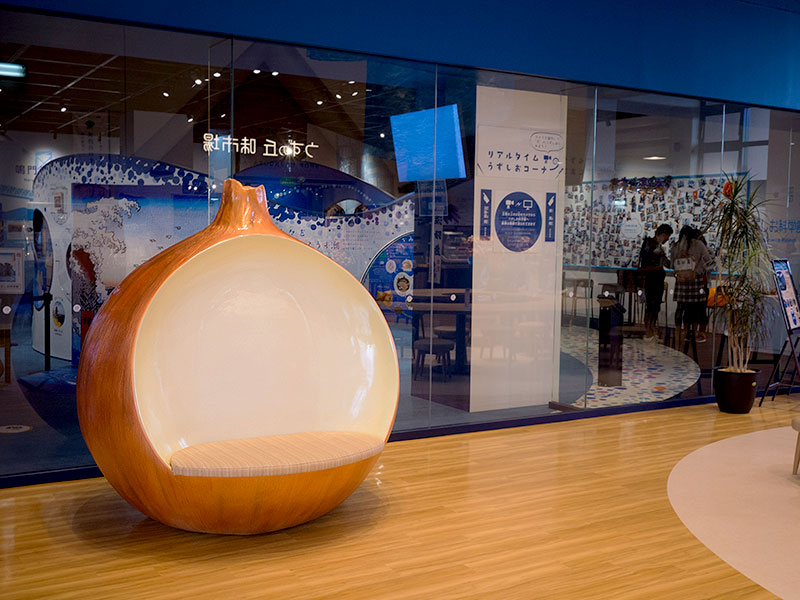 The famous Awaji onions are also part of the design scheme. 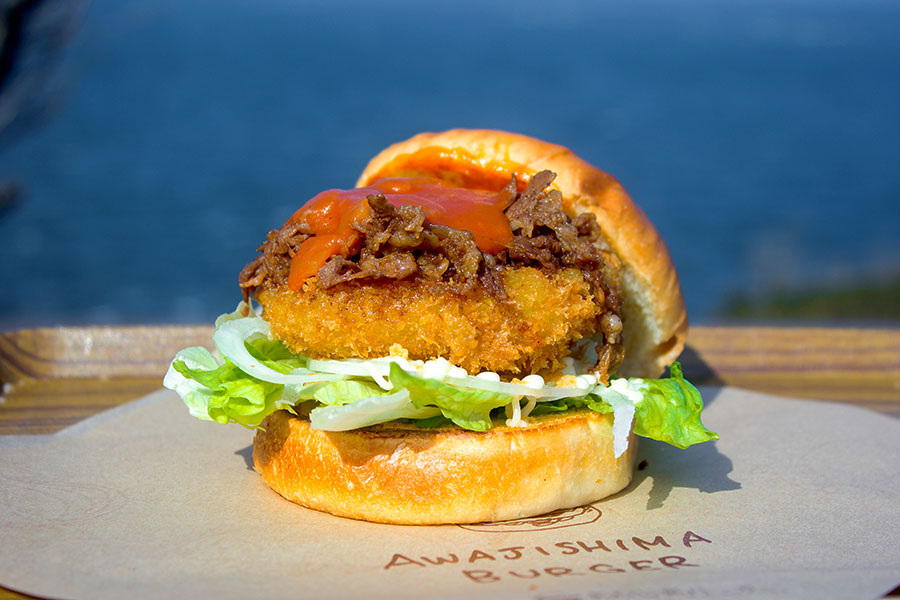 Don’t miss out on an onion burger while in the area! 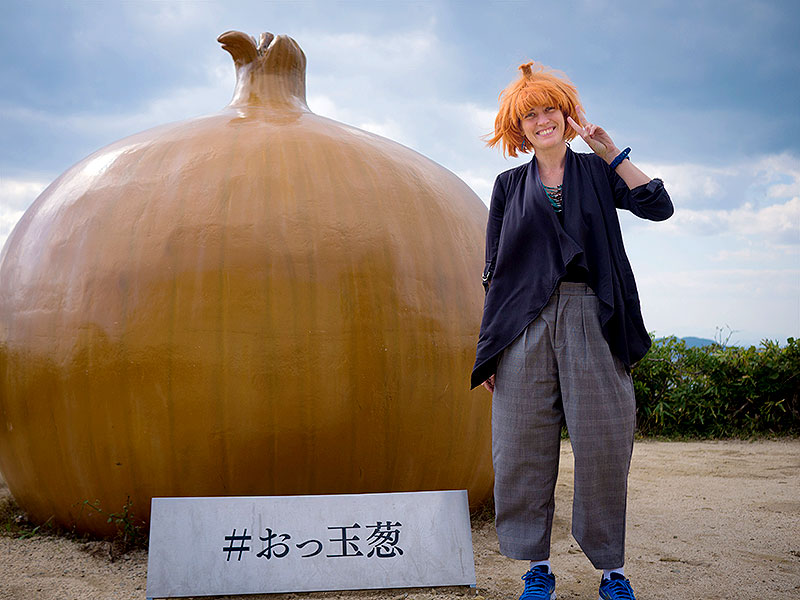 Be Insta-famous in an onion wig – free to try!

Awaji Island is slightly off the beaten track for many foreigners visiting Japan. A little challenging to access, as there is no train line, most visitors make the trip from Kobe via bus or car, crossing the giant bridges that span the straits. For those who make the extra effort, Awaji has gorgeous beaches in summer; quiet, rural ryokan; and a quirky science center dedicated to the Naruto Bridge.

Naruto, and its bridge, are best known in Japan for the huge, sea-churning whirlpools in the strait between Awaji and Shikoku Island. They can be seen from a highway road-station on Naruto bridge, and many visitors will pay for an exhilarating ferry ride that takes them into the heart of the swirling maelstroms. The whirlpools have even made their mark on Japanese culture as the blue or pink curl seen on kamaboko, a fish cake often found in bowls of ramen noodles.

With commemorative monuments spread throughout the country, competition for people’s attention is fierce, but Uzu no Oka, also known as the Naruto Bridge Memorial Hall, has proved consistently popular, particularly in the summer holidays. The Memorial Hall celebrates all that is Awaji — not just the bridge, but also their star agriculture good, the trusty onion, which makes its way into an amazing array of products. I spotted an Awaji Onion Burger stand near the hall entrance, and made a mental note to return to investigate later. A sign inside indicated that a short movie presentation would soon start, so I paid my 500 yen and made my way to the theatre room.

The building’s designers must have had a plan to represent the grandness of nature with enormous props. A great, glowing Earth hangs from the roof; a movie screen stretches to the high ceiling; and a massive scale representation of the Seto Inland Sea dominates the center of the room, complete with water. Myself and the other viewers took a bench on the edge of the room as the lights dimmed. The movie is broken into 4 segments, including an enlightening explanation of the Naruto whirlpools. For example, I learned how the narrow Tokushima strait, as the connection point between the Seto Inland Sea and the Pacific Ocean, has a two meter difference in water level, and how the massive amounts of water flowing between the two oceans cause the violent water-whirls at both high and low tide. A staff member came out as a spotlight illuminated the diorama, and using a laser pointer, she indicated the tiny whirlpools flowing realistically beneath the tiny, scale model of Naruto Bridge. Meanwhile, the video moved into the next segment, showcasing beautiful sunrise timelapses; visions of tides turning; and an up-close view of the whirlpools from above.

The movie theatre exits into a cute kid’s room, where several young children were already playing happily. The wall of a children’s slide showed an illustration of the Seto Inland Sea swallowing several famous tall buildings in Japan, including Kobe Tower and Tokyo Tower. Turns out, Tokyo’s Sky Tree is tall enough to poke a little out from the sea. Science! A little dock with joysticks grants interested visitors pan and zoom control over cameras on the tops of the bridge itself, and a board on the wall gives the high and low tide times, i.e. when it might be possible to see the whirlpools at their highest intensity.

The famous Naruto swirl is incorporated into the design of the kid’s room, where waiting guests can sit at a beautifully carved wooden swirl table beneath a sheath of blue cloth hanging from a swirl-patterned ceiling. Some people, however, chose to sit in the giant onion benches instead. In fact, the Memorial Hall has embraced the Awaji onion motif enthusiastically, with “onion wigs” to rent, an onion UFO catcher to play, and of course, onion soup and actual onions (big ones!) to buy as souvenirs. All these onions reminded me of my lunch date with that delicious looking burger.

Upstairs in the restaurant, visitors were tucking into fresh Awaji seafood, the specialty being a sea-urchin set. The view of Naruto bridge against the backdrop of green Awaji Island, and the bright blue of the sea, was gorgeous. As tempting as the location was, and as delicious as the dishes looked, I still had my heart set on that onion burger.

I was not short of attractive options, but the young couple in front of me excitedly ordered the “Awajishima Onion Beef Burger.” Their enthusiasm was infectious, so I took the plunge too. After a few bites it all became clear — I had a winner on my first try. In Japan, there is so much emphasis placed on freshness and using local ingredients, that every place seems to have its signature ‘local dish.’ The Awaji onions filling my cutlet, the onion pickles, and even onion chips were just as sweet as promised. While onions may not be the first thing to come to mind when building a local cuisine, they were certainly working for me, and so, it seems for Awaji Island.