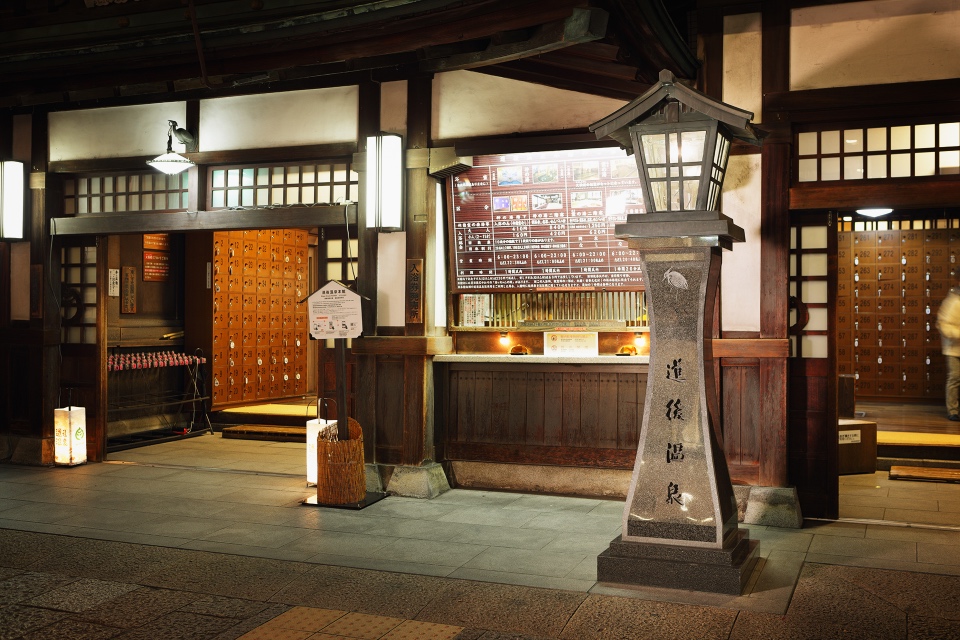 The entrance to the famous Dogo Onsen. 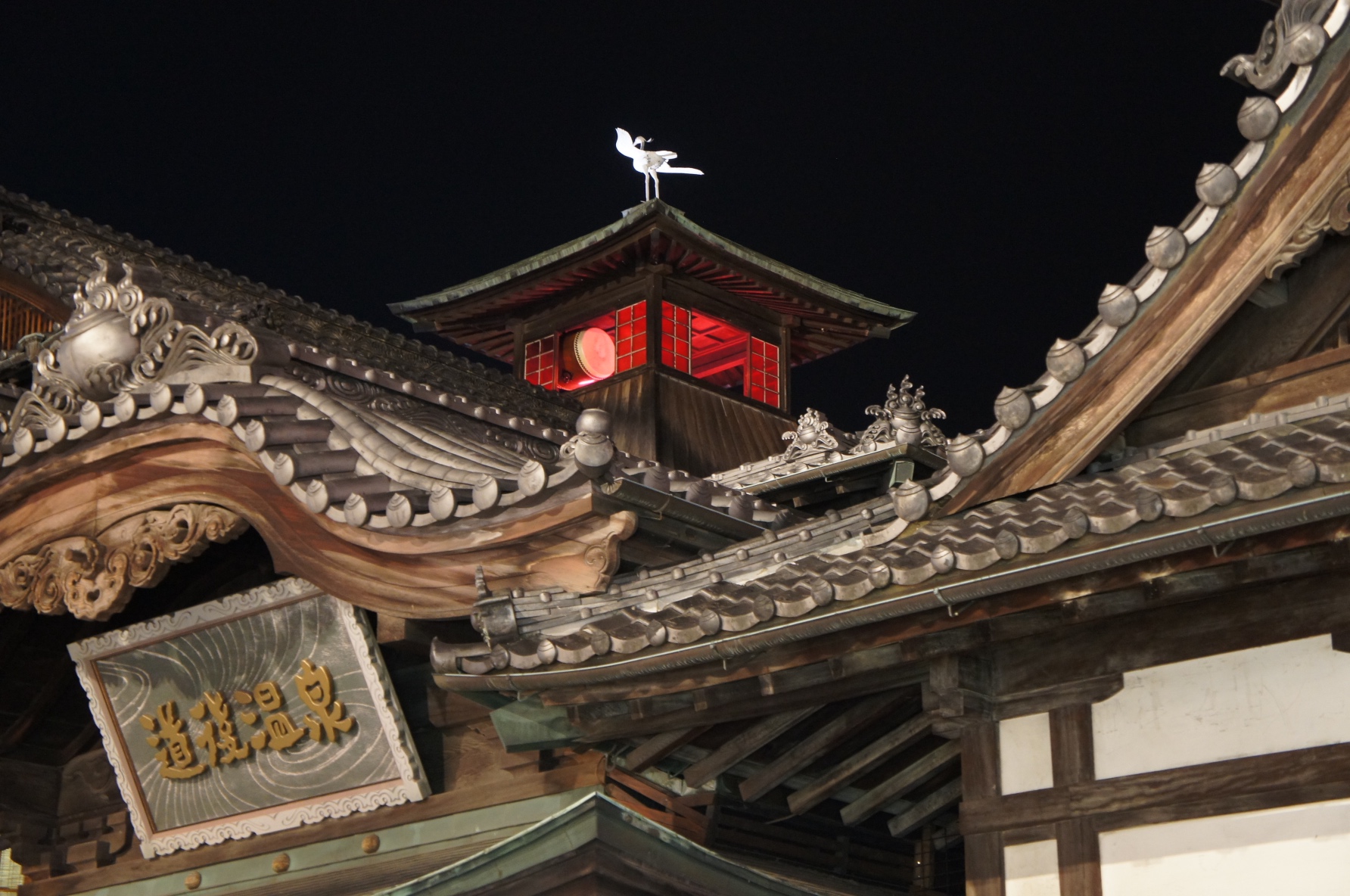 The white egret on the roof. 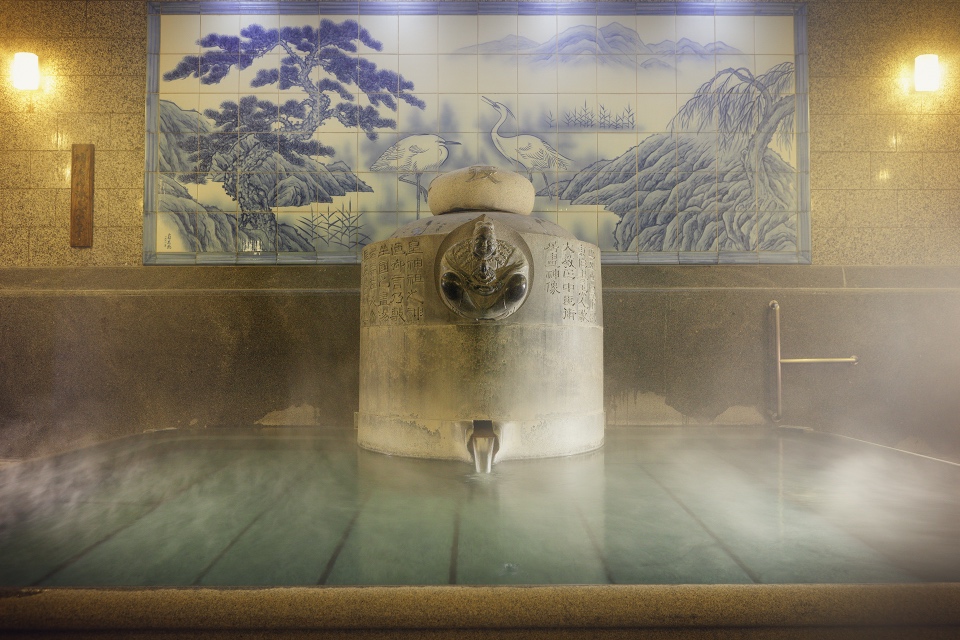 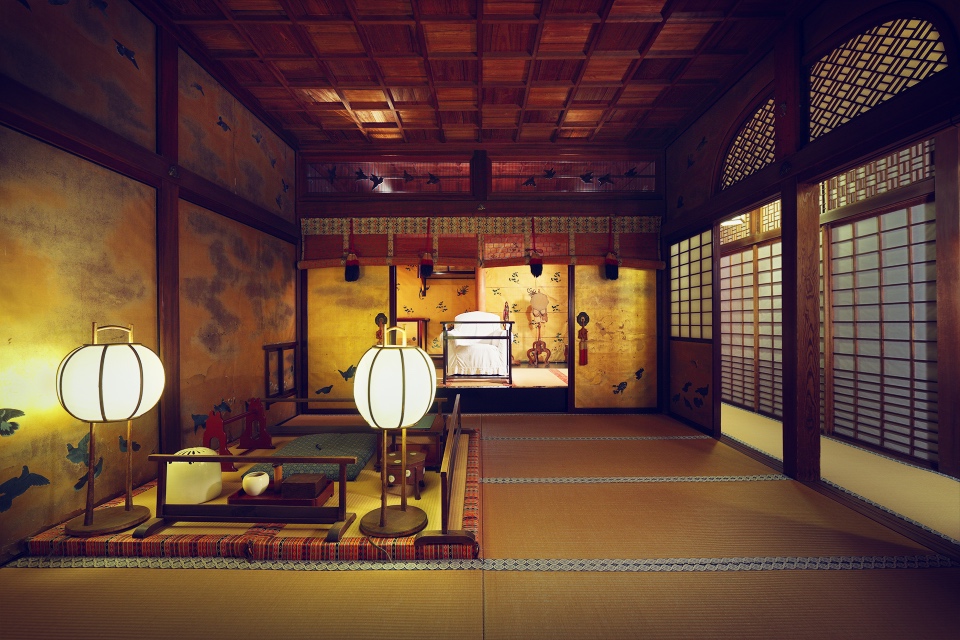 The resting area for the imperial bath. 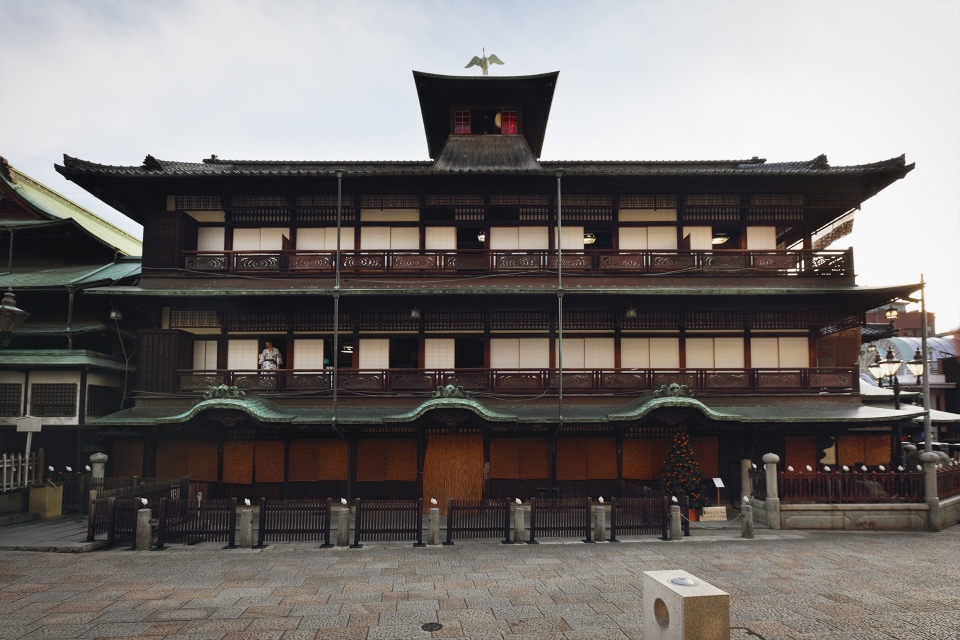 The north side of the building with the old entrances still visible.

“Keep an eye out for the egret – it’s everywhere,” says Kenshi Katano, an employee at Dogo Onsen, Matsuyama. “You’ll see it in the emblems and designs around the building. There’s even one on the roof.”

According to legend, a white egret pointed to the natural hot spring bubbling up at Dogo in Matsuyama over 3,000 years ago. Onlookers saw the egret dip its injured leg into the healing waters and cure itself. This marked the beginning of Dogo Onsen, the oldest onsen hot spring in Japan.

The main building, or honkan, was built in 1894 and caters for the thousands of bathers and visitors that flood through its doors every day. Approximately 800,000 people visit the baths every year, working out at roughly 2,000 per day and 8,000 on national holidays.

You might recognize the building. It directly inspired the hot spring featured in Miyazaki Hayao’s highly acclaimed Ghibli animation ‘Spirited Away’. According to Katano, there was a surge in visitors after the film received global attention. It also features in the famous Michelin Guide.

As we approached the main ticket counter, Katano guided me around the outside of the building. He pointed to the egret on top of the watch tower on the roof.

“Do you see the way it faces?”

I could see the perched statue of the egret faced away from the busy entrance – it was pointing north.

“The old entrance was on the north side of the building, you can still make out the old entrances to the different baths,” explained Katano, pointing out evidence of Dogo Onsen’s transformation through the ages. “They still sound a taiko drum from the watchtower three times a day; at 6am when the onsen opens, at midday and at 6pm. It’s a tradition from a time when people didn’t carry watches.”

As we walked farther, we came to the eastern entrance – built and maintained for the exclusive use of the Japanese Emperor. My ticket to Dogo Onsen included a tour of the Imperial bath. Although it’s a famous part of the building, the bath has only been used a handful of times. Nevertheless, the decadence of the gold and silver leaf shoji screens and the reinforced hardwood ceiling to stop potential assassins were impressive. It was interesting to hear the ritual of imperial bathing, including how the emperor wears a thin silk gown when he bathes.

Next it was my turn to experience the famous waters for myself. As I washed and entered the stone bath, the water did feel different. The stone baths made from a special granite sourced from Kagawa were unlike any of the usual hot spring baths you see in Japan. The water left my skin feeling smooth and rejuvenated.

Afterwards I learned from Katano the waters in Dogo are blended, not heated. In many parts of Japan, spring water is heated in boilers before circulating to the bath. But in Dogo, the water is a blend of 18 natural hot springs, all rising up from the earth with temperatures ranging from 20 degrees to 55 degrees. The spring water is blended to a comfortable 42 degrees before flowing into the baths. The gentle alkalinity of the water also means it’s safer for people with sensitive skin.

You can buy options to enjoy traditional Japanese tea and snacks as you relax on the tatami in a yukata gown after your bath. There’s a choice between the open relaxation floor, or, for a little extra, a small private tatami room. Whichever you choose, taking time to unwind after your bath is one of the joys of the experience.

As if to add an extra dimension to this adventure, the world famous Japanese photographer and director Mika Ninagawa is holding a temporary exhibition in the window panels. Famous for her vibrant use of color and floral patterns, she doesn’t disappoint at Dogo. The bright colors give an interesting modern twist to this otherwise highly traditional setting.

I noticed Dogo Onsen is actively creating grand art projects and installations. Walk through the popular shopping arcade outside and you’ll see photographs and artworks on display at various times of the year by prominent artists.

A clear example of Dogo Onsen’s artistic and creative direction is their newly opened bathhouse ‘Asukanoyu’. Only 100 meters away from the main building, this tastefully designed hot spring was created with a view to recreate Dogo Onsen as it had been during the Asuka Period (592CE to 710CE).

They invited top craftsmen and artisans from across the region to fashion new and sometimes experimental installations, while using traditional materials and methods. The beautiful intricate designs on the Japanese washi-paper banners that stretch across the entrance hall are all the more astounding when you hear they naturally remove excess moisture from of the air.

The bath itself was a recreation of the baths at Dogo. Although there was a splash of the twenty-first-century. Every once in a while, a moving projection mapped image of birds, clouds and sky appear and shift on the main wall.

I felt immersed in history when I bathed in Dogo. As I reclined into the warm water, I felt a strange feeling of connection with the past and the future. A feeling of connectedness with the countless people who journeyed to these waters through the ages and to those who would come for centuries into the future. It was an experience to savor and one not to miss on any trip to Shikoku and Matsuyama.

Asukanoyu
Tel: 089-932-1126
Hours: 7am to 11pm (reservations can be made 3 months in advance)
Address: 19-22 Dogoyunomachi, Matsuyama, Ehime
E-mail: dogojimu@city.matsuyama.ehime.jp
https://dogo.jp/onsen/asuka (Japanese only)