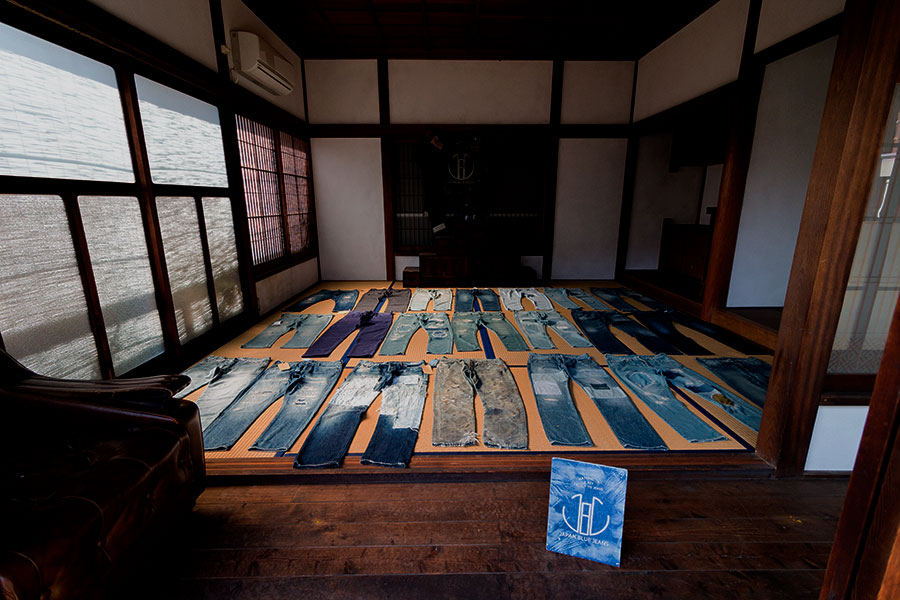 A small but impressive jeans museum at Japan Blue. 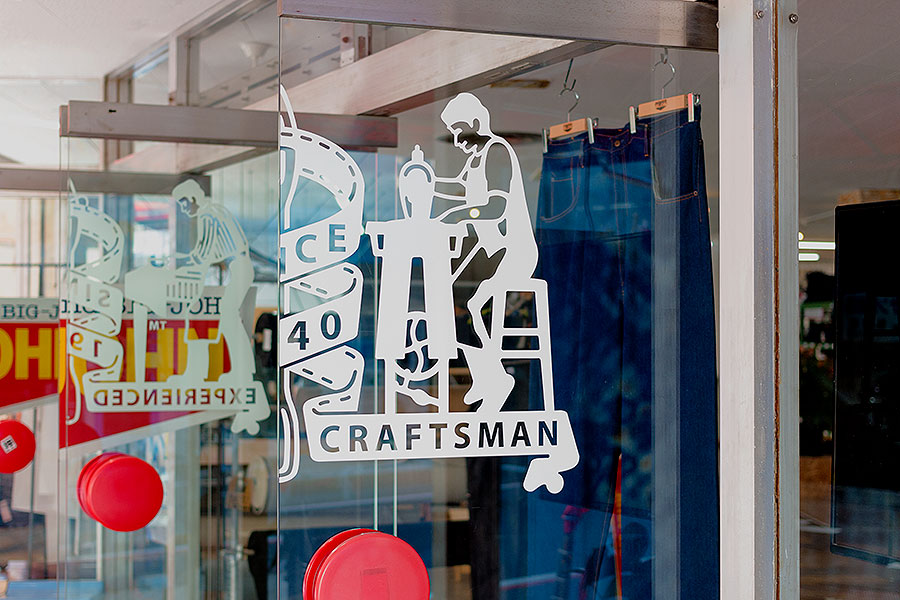 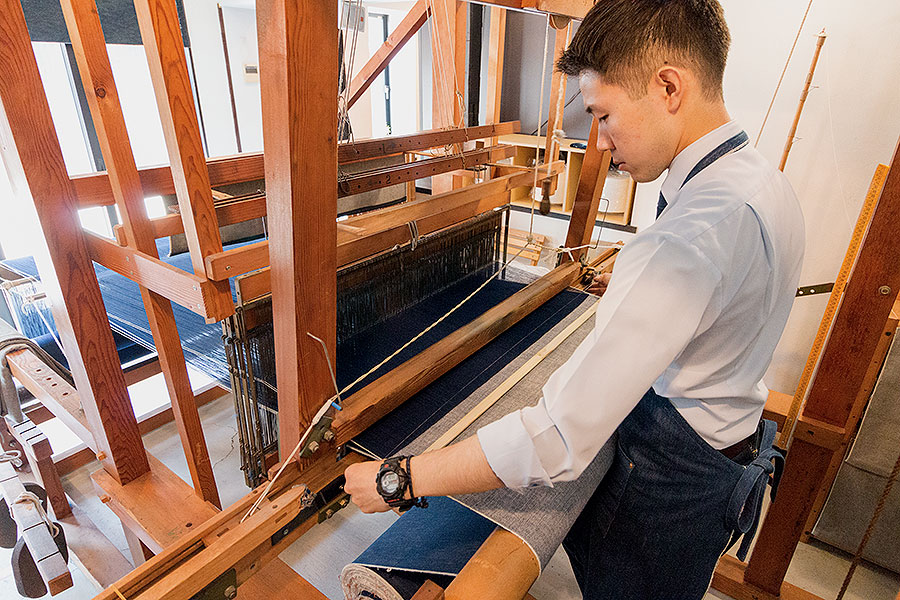 A craftsman at Momotaro Jeans weaving denim on a classic, hand-operated loom. 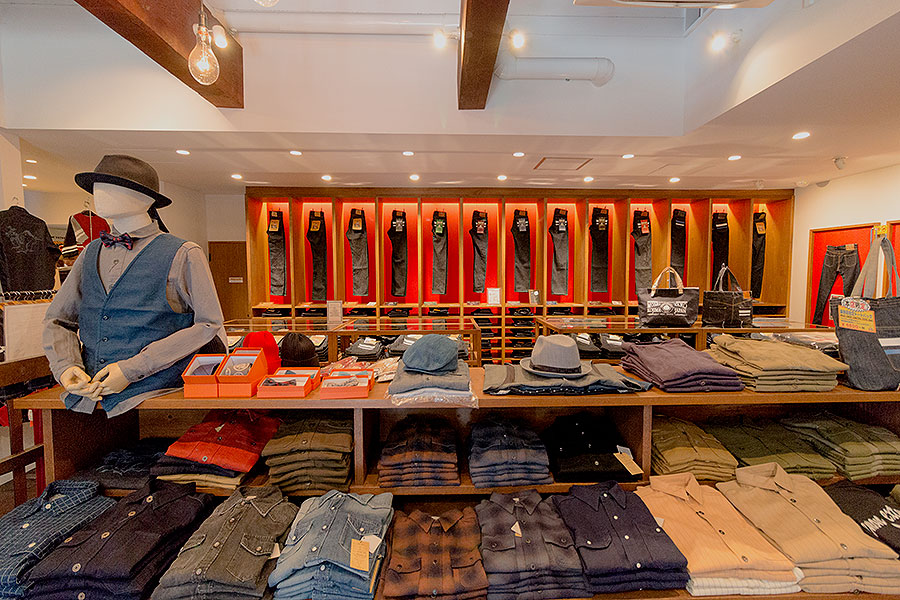 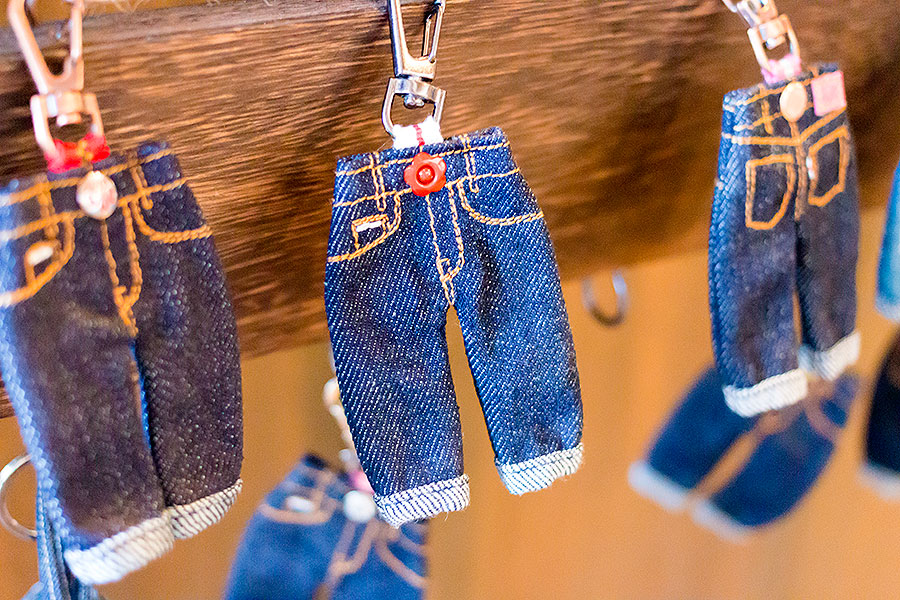 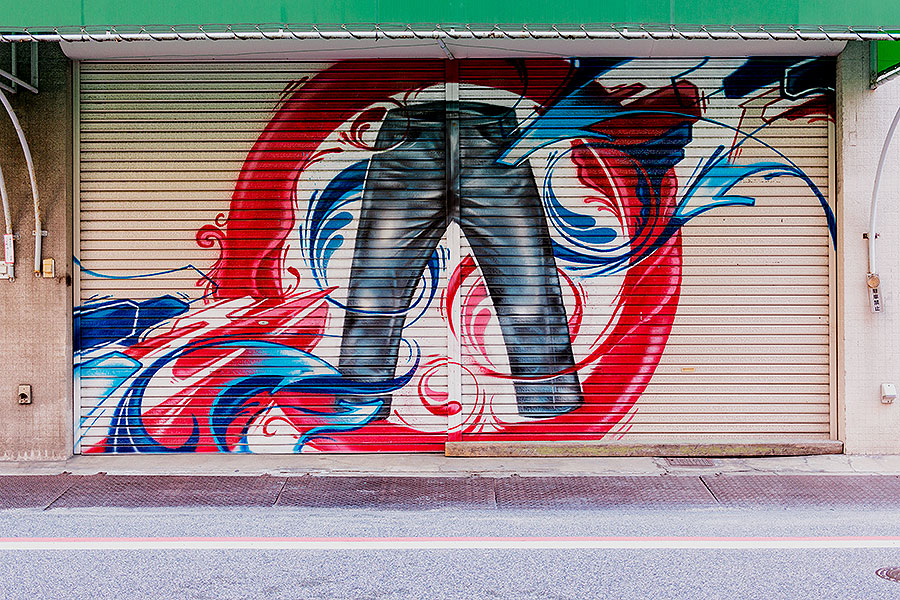 You’ll never guess what I discovered while visiting Jeans Street in Kojima, Japan. It’s a bit of a secret, really—about Jeans Street. Turns out, it’s not really about jeans. In fact, it’s not even about denim.

So what is it about?

Simple.It’s about a hip, modern expression of a traditional Japanese craft that stretches back for centuries.

Reclaimed from the sea in the 16th century, the soil of Kojima, Okayama, proved too salty to grow rice, so local farmers instead grew cotton. And with the fluffy white blooms arose the Okayama textile industry, which produced much of the nation’s finest cotton goods.

Yet following the rise of synthetic fibers in the early 20th century, and trends leading away from traditional Japanese clothing, Okayama found itself in need of a new thread to follow. As images of off-duty American G.I.s relaxing in blue jeans captured the postwar imagination, the thread that appeared was denim.

In 1965, the first Japanese jeans, produced by Big John in Kojima, hit stores with smashing success. Soon more Japanese jeans makers joined the fray, and the floundering Okayama textile industry emerged from the shallows with fresh wind in its newly loomed, indigo sails.

Walking along the street, I couldn’t help but smile at the clever ways in which the jeans theme found expression. Everything from vending machines to public ashtrays featured the denim motif, and the street itself lies overstretched in more than one place with a jeans noren (a traditional, short curtain hung above shop entrances).

Yet oddly enough, when Jeans Street started in November 2009, there were only three shops present—Momotaro Jeans, Dania Japan, and Womb.

“In the beginning, it was really just a long shuttered up street with these three shops,” laughs Toshiharu Suesa, Senior Official at Kojima Chamber of Commerce. “The experience was probably a little disappointing for visitors who weren’t already denim enthusiasts.”

Yet as more businesses moved in, and Jeans Street took on more and more of its happily denim-obsessed character, all that changed. In just eight years, Kojima Jeans Street went from 6,000 annual visitors to more than 150,000—a number that’s still increasing.

In response to the influx of foreign tourists, the Kojima Chamber of Commerce is now developing an English language map, and some stores even provide English training for their staff. Additionally, one third of the shops are duty-free, with more soon to follow suit.

During the Showa Period (1926-1989), the area now occupied by Jeans Street, then called Ajino Street, contained a bustling shopping arcade with more than 200 shop spaces. Yet over time, as malls and department stores grew in popularity, and more and more small town residents moved to bigger cities, business waned. Before long, Ajino became a shutter town.

That’s when local jeans makers decided to claim it for their own.

“However, because it’s an old style shopping street, many of the businesses have living quarters attached,” explains Suesa. “A lot of folks are still living here with the shop shutters closed. They could live in the back rooms or upstairs, but many don’t want to rent out the shop space simply because they don’t want to be disturbed.”

Today Jeans Street boasts 38 businesses along its 400 meter length, with about 5 more shops added annually. By happy coincidence, the carefully preserved Showa Era architecture along Jeans Street provides a glimpse into how Japan would have looked when jeans first hit the market. Even the old Showa Era bank and post office buildings have been converted into stores. And in the meantime, as a way to keep the empty spots festive, some of the building owners have agreed to have their shutters painted with jeans-themed murals.

And for those looking to get their hands on custom made denim duds, Momotaro Jeans offers order-made jeans which can be purchased directly at their shop on Jeans Street. These custom denim specimens take 30-45 days to complete, so most visitors can expect to pay international shipping on top of the made-to- order premium. In fact, as Momotaro Jeans keeps at least one English-speaking staff member on duty at all times, it should theoretically prove possible to order a custom pair even without any Japanese language ability.

However, even the non-custom jeans you’ll find on Jeans Street will convince you at once that Japan’s reputation for producing the world’s finest denim remains well deserved.

As I walked back along the faded indigo asphalt at the entrance of Jeans Street, I felt a deep admiration for the passion and dedication of the denim community who created this space to ply—and celebrate—their craft. Passing by open storefronts shining along the half-shuttered avenue like rivets on denim, I caught sight through a store window of a man nodding approvingly at a pair of jeans his partner had just tried on.

Every denim enthusiast knows the best jeans can take years to fully break in. Over time, the fades and creases in the fabric become a joint expression between the wearer and the artisans who made them. It’s only natural that a street dedicated to jeans should undergo the same time-honored process.