Shells on the Sea Shore - Raw Oysters at Farm Suzuki 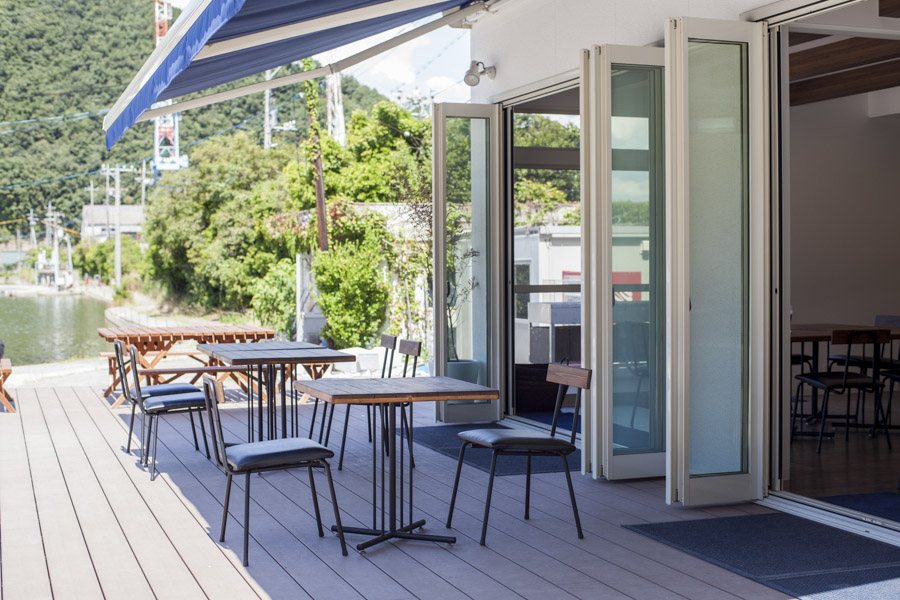 The dining area at Farm Suzuki. 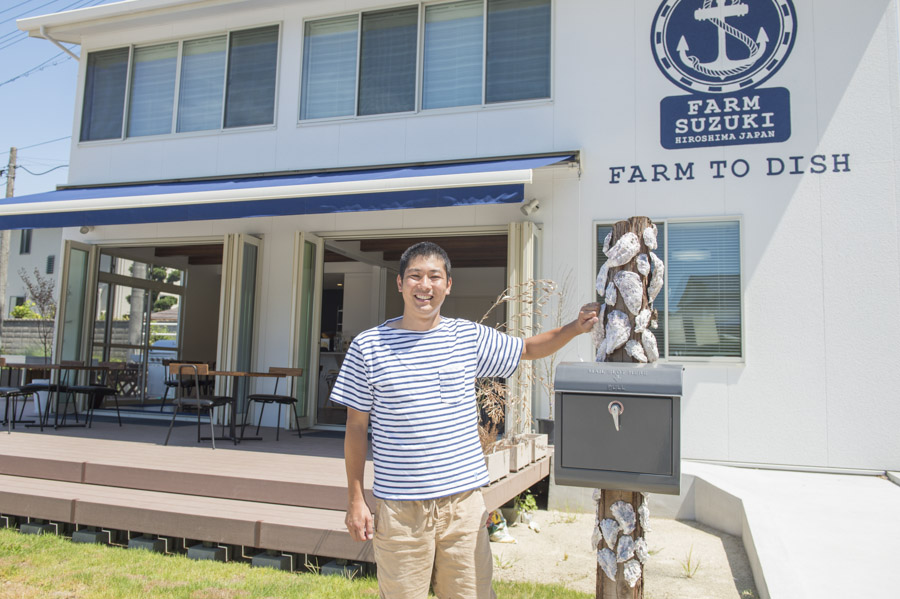 Takashi Suzuki standing in front of the Farm Suzuki restaurant located inside his oyster farm. 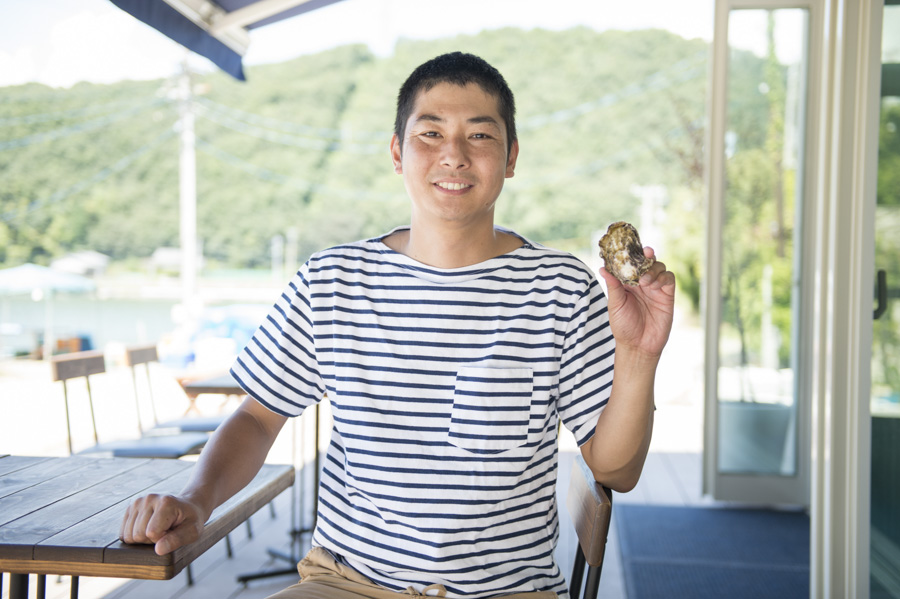 One of Farm Suzuki’s famous oysters grown to be consumed raw. 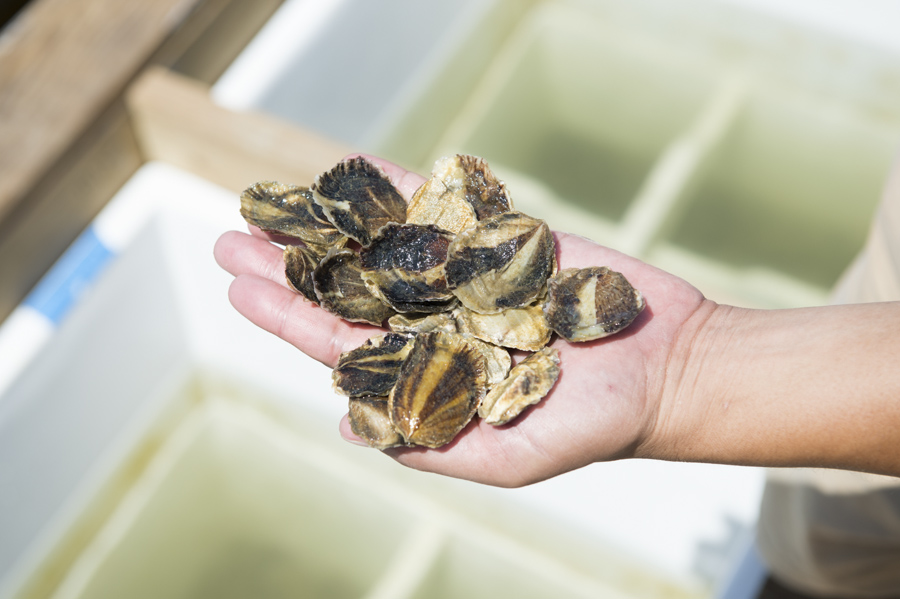 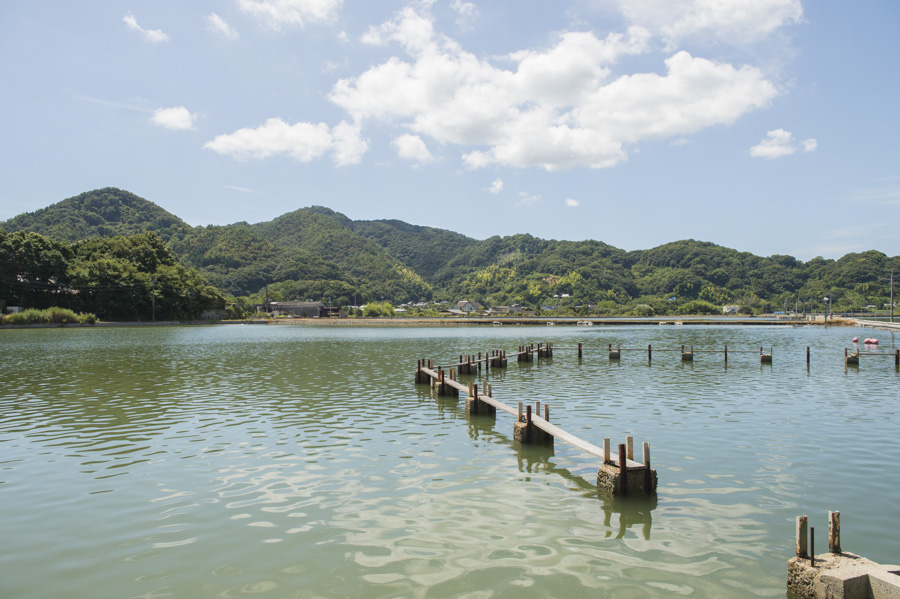 A view out over Farm Suzuki’s oyster fields.

Look out to sea from Hiroshima Prefecture and you’ll see bamboo rafts floating on the serene waters of the Seto Inland Sea. Fishing boats with crane attachments sail from one raft to the next before returning to their makeshift jetties. These are Hiroshima’s oyster-cultivators. They grow their crops of succulent oysters on wires hanging down into the water from the bamboo struts.

During the year, they maneuver their rafts around the inlets and river openings, soaking their oysters in the nutrient-dense waters. Between November and March, they collect the rich bounty. The conveyor belts at oyster huts up and down the coast whir as they bring in the harvest. Local ladies or obasans sit in their overalls, shucking oysters all day long.

Methods may have changed and advanced, but oyster farming has been a part of Hiroshima culture for centuries. Records of oyster farming in Hiroshima go back as far as 16th century. Today, the prefecture is the largest producer of the bivalves in Japan, harvesting over 25,000 tonnes per year, accounting for 60% of Japan’s entire production.

You have to try some, especially if you visit during oyster season. But you might be surprised. In a land famed for its sushi and raw foods, oysters are usually anything but. You’ll see them fried, deep-fried, breaded, steamed, and grilled more often than you’ll see them served raw straight out of the shell. However, there is a growing trend towards enjoying raw oysters and Takashi Suzuki of Farm Suzuki is one of those at the forefront.

He runs his innovative oyster farm and restaurant on the beautiful island of Osaki Kamijima in the Seto Inland Sea.

“We grow our oysters to be consumed raw,” explains Suzuki. “They are smaller than oysters you usually find in Japan, making them perfect for one mouthful.

” Born and raised in Tokyo, Suzuki studied at the National Fisheries University before joining a trading company importing frozen shrimp from Southeast Asia.

“Even when I was working in the company, I always had a dream to produce my own quality oysters in Japan and export them around the world,” explains the ambitious entrepreneur.

He left his job and set about achieving his dream. He decided to study from the best and headed to the famous oyster growing region of Marennes-Oleron on the French Atlantic coast. This region is famous for maturing their oysters in special oyster ponds dug out of the salt flats. This exposes the oysters to the Blue Navicula algae, giving them a distinctive flavor and coloring.

Back from his research trip around Europe, Suzuki travelled the length and breadth of Japan looking for the perfect location to start his new business. His search led him to the northern tip of Osaki Kamijima Island. A set of artificial lakes once used as salt pans during the Edo period (1603 – 1868) and shrimp production in the recent past were lying fallow. They were perfect. He opened Farm Suzuki and began raising some of the finest oysters and shrimp in the Seto Inland Sea.

“When I saw oysters being grown in salt pans in France, I knew I wanted to try something similar in Japan. It’s the perfect environment for cultivating shellfish,” says Suzuki.

The shallow depth of these lakes allows light to penetrate the water creating the perfect environment for phytoplankton – an oyster’s favorite food. In addition, water running off the surrounding mountains combine with fresh spring water bubbling up from Mount Kannonmine, diluting the salt content of the seawater pumped into the lakes.

“Usually the salinity of seawater is 3.5% but here it’s about 2% less. This is key, because it lets us grow a different type of phytoplankton compared with what you usually find in the sea,” explains Suzuki. “The oysters and shrimp eat that plankton and their flavor improves.”

It certainly does. The strong and sometimes sharp flavor of the sea you get with some raw oysters is absent in Farm Suzuki’s oysters. The oysters here have a more delicate, creamier taste and consistency.

For customers who want really fresh, there’s a restaurant built within the farm complex. Travelers come from far and wide to visit the farm, go on one of Farm Suzuki’s farm tours and indulge in oysters, shrimps and wine in the restaurant. This is a must-see destination for any avid foodie.

“People come here from around the world to sample our raw oysters in these beautiful surroundings,” says Suzuki. “I’m sure it’s comforting to see the oysters growing in a sheltered and protected lake, reducing the risk of any contamination.

” With that peace of mind, it’s a joy to visit Farm Suzuki and revel in the atmosphere of this idyllic island while indulging in the fruits of the sea.