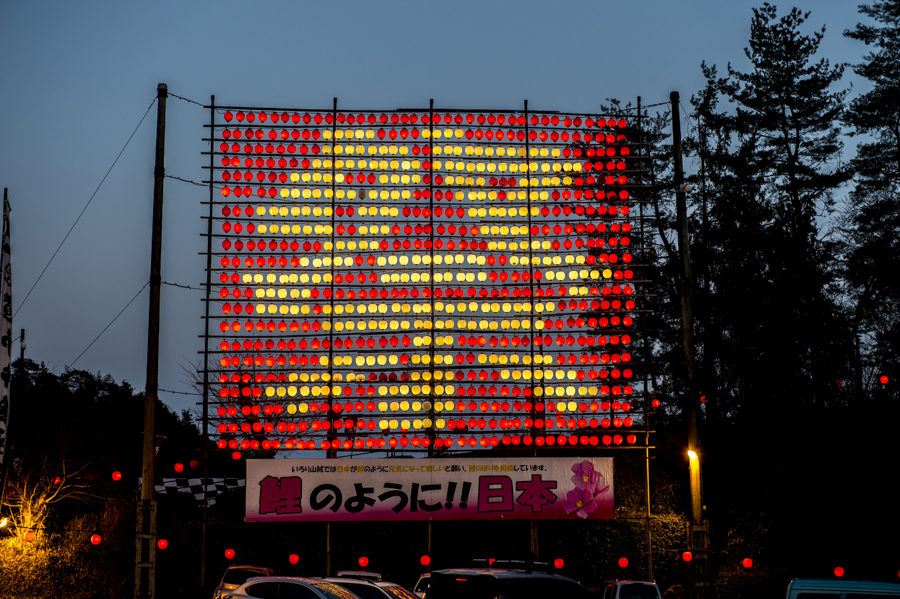 Lanterns spelling out the Japanese for ‘festival’ by the entrance to Irori Sanzoku. 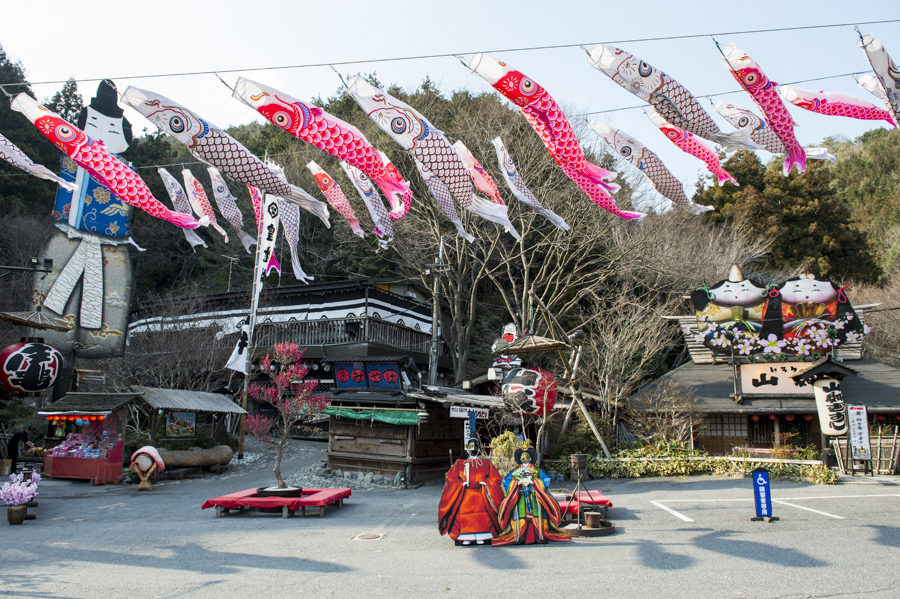 The Irori Sanzoku is a feast for the eyes. Hard to miss when you’re driving on Route 2. 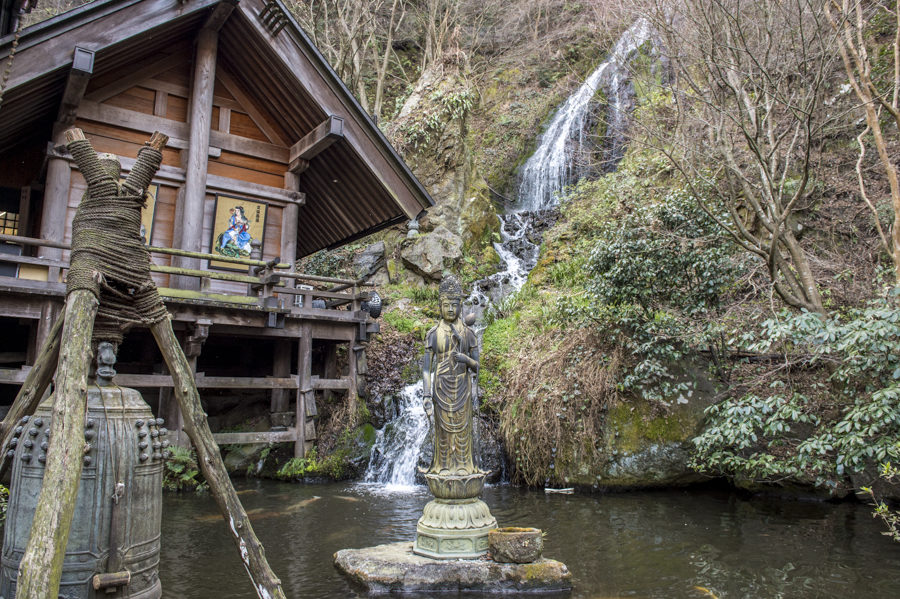 They landscaped a whole mountainside to create this cascading waterfall. 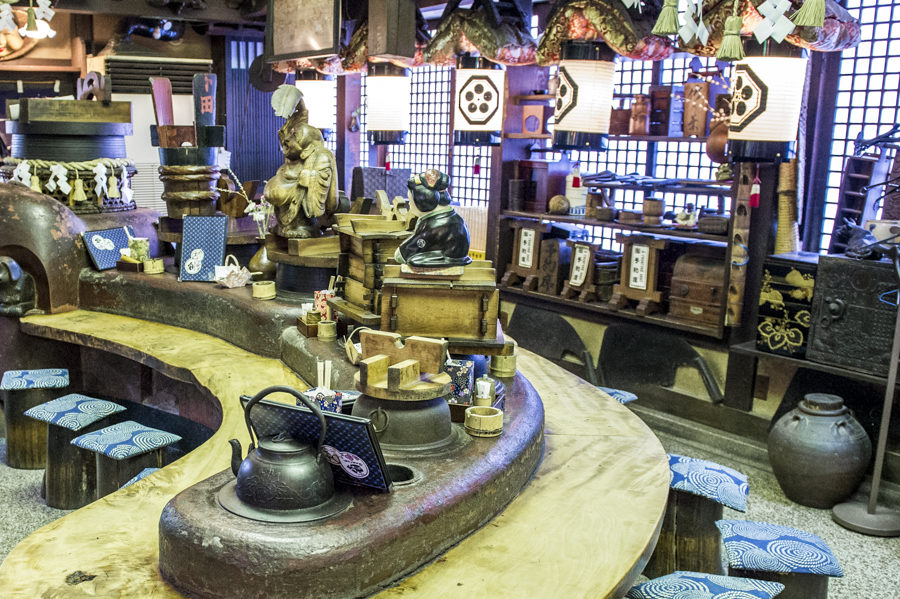 The traditional hearth built inside the Kamado restaurant. 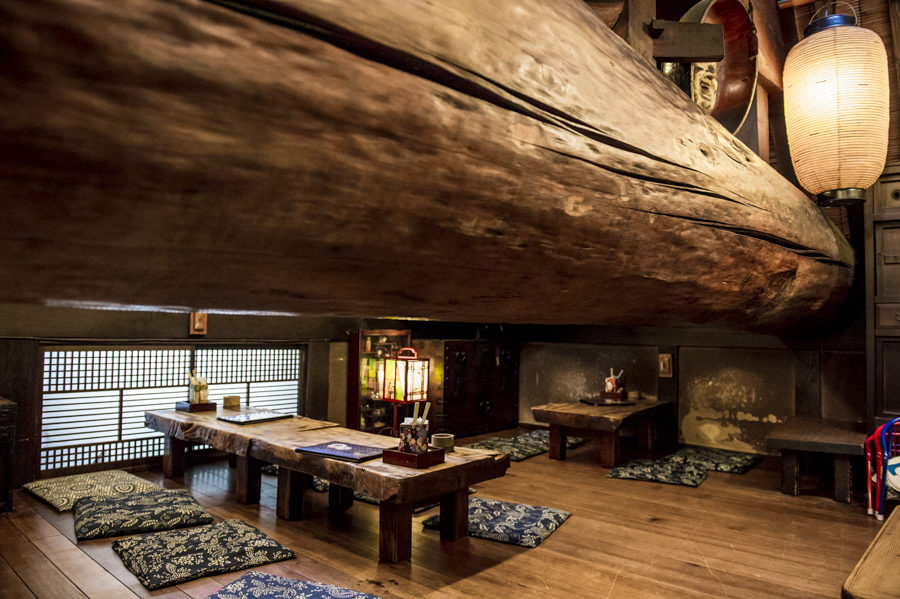 An example of the enormous tree trunks used in the construction of the Tourian restaurant. Iron Sanzoku prides itself on the quality of its special sumeragi beef.

The whole complex lights up at night, creating a beacon for hungry, fun-loving customers.

It appears like a mirage out of the darkness. A mass of lantern lights illuminate the Japanese tower and other traditional buildings on the roadside. Enormous decorative koi carps flutter in the breeze. On the other side of the road, hundreds of glowing lanterns form the Japanese character for ‘festival’. This is the famous Irori Sanzoku in Yamaguchi Prefecture – a restaurant complex where the beat of festival drums sounds all year long.

The Irori Sanzoku literally means the ‘hearth of the mountain bandits’. It consists of six individual restaurants spread across three locations – the Kuga Area, the Nishiki Area, and the Shuto Area. The original and most popular of the three is the Kuga Area located on Route 2 that runs from Osaka to the tip of Kyushu.

“My grandfather set up the original restaurant in the heart of Hiroshima City in 1967,” explains the current third-generation president of Irori Sanzoku, Kota Takahashi. “But he predicted the boom in cars and driving holidays, so he uprooted and set up the first Sanzoku restaurant in Kuga in 1972 specializing in steaks made from sumeragi beef.”

From the beginning, their aim has been to do things differently to their competitors, and never cut corners. The original traditional Japanese thatched-roof steak restaurant (later destroyed by fire) took seven years to build. They catered to passing trade during its construction, first by installing vending machines for thirsty drivers, then setting up a temporary udon noodle stand. The sanzoku udon remains a popular dish to this day.

“We thought udon on its own wasn’t interesting, so we created two other dishes to accompany the udon – the sanzoku grilled chicken and the big onigiri rice ball,” says Takahashi. “We’re really proud of our high quality beef and want more people to try it, but at the moment, the grilled chicken is by far the most popular item on the menu.”

Although the Sanyo Expressway replaced Route 2 as the main conduit for traffic in western Japan, the Irori Sanzoku has become a destination in its own right. Each restaurant at Kuga mimics a certain building style. The Sanzoku is built like a traditional Japanese farmhouse, the Kamado like a merchant’s house and the Tourian (the newest of the three and the most luxurious) is built to resemble a Japanese castle and comes decorated with traditional samurai armor.

The food doesn’t disappoint. The popular grilled chicken comes cooked to perfection with crispy skin on the outside and succulent meat on the inside. The giant onigiri rice ball contains three distinct and delicious fillings. The steak platter is served on ornate Chinese slate dishes and comes with a burning hot stone where you can sear the meat to your liking. Delicious.

The other reason people keep flocking to Irori Sanzoku is the spectacle. Walking into the grounds is like stepping through a looking-glass. It has everything you associate with traditional Japan, but rearranged and condensed. The result is a look and an atmosphere that feels both familiar and original at the same time.

“All our buildings are new, but constructed in the traditional way. When our carpenters didn’t know the old building method or technique, we researched it ourselves,” explains Takahashi. “At the same time, we made some adjustments, tweaking the appearance to make the buildings more eye-catching. We’re always thinking about how to entertain the customers.”

Whether it’s chiseling through the mountainside to create a towering artificial waterfall, importing a gigantic beam for the Tourian restaurant directly from North America, or recently spending close to a million dollars on the restrooms at the Nishiki Area, it is clear Irori Sanzoku don’t do things by halves.

Every detail has been carefully chosen and choreographed. The seasonal decorations Takahashi and his staff create by hand, the enormous paper lanterns inside the restaurants all leave you in awe. But for a venue so dedicated to tradition, Irori Sanzoku continues to evolve.

“We’re always under construction,” jokes Takahashi. “That way, customers can always look forward to seeing something new every time they visit.”

For three generations, their mantra has been to create something different to their competitors, something unique. With their delicious grilled meat, extraordinary architecture and surprising decor, they are doing just that.