The Setouchi region is so blessed with attractive places to visit and activities that it can sometimes feel difficult to decide on a destination, or put together a realistic schedule to fulfill your traveling ambitions. With that in mind, the staff here at Setouchi Reflection Trip have put their heads together to create a five-day tour of the western part of Setouchi designed for travelers wanting a broad introduction to the best of the region.

Matsuyama Castle, constructed between 1602 and 1628, is one of just twelve castles to retain its original Edo-era keep through Japan’s turbulent emergence into a modern nation. Today, all twenty-one of Matsuyama Castle’s buildings are listed as Important Cultural Properties by the national government, and it remains one of Japan’s most treasured castles. The castle’s steep hilltop position allows for superb views of the surrounding city and countryside, and far into the Seto Inland Sea which alone will prove well worth the 20 minute walk to the top. If the walk isn’t ideal for you, the castle’s cable car and chair lift options may prove an attractive alternative to the climb. Over the centuries, parts of the castle have been destroyed by fire or bombardment, but thanks to historic renovations and meticulous maintenance, Matsuyama Castle offers a rare history lesson in feudal architecture and warfare that will fascinate all ages. As a bonus, you can also hire armor and wield a sword to elevate your castle experience to a completely different level of authenticity.

With a history reaching back more than 1,000 years, Dogo Onsen in Matsuyama City is one of the oldest hot springs in Japan. Famed for its water’s healing properties, the three story castle-like appearance of Dogo Onsen’s main building oozes old world charm. Understandably Dogo Onsen rates highly on tourist wish lists, and if you’re planning to stay the night, then location counts. Why? Because having accommodation close enough to the baths that you can toss on a yukata bathrobe and stroll over for another dip takes the experience to an even deeper level of relaxation. Yamatoya Honten, one of the oldest and best known ryokan in the area, fits this bill perfectly. A short five minute walk from the railway station, and only a one minute walk from the Dogo Onsen main building, you could not ask for a better location. Established more than a 150 years ago, it has grown into a substantial operation, closer in size to a hotel, but still retaining the intimate and friendly feel of a ryokan. As you would expect with any ryokan, there’s a delicious artistry that goes into creating the standout multi-course Japanese kaiseki meal, but you can just as easily order top-end Chinese or French dishes if you feel so inclined. One special feature of Yamatoya Honten is the onsite Noh theatre, with nightly performances for guests before they dine. In fact,3 for an extra fee a Noh ‘experience’ can also be arranged. Yamatoya Honten’s close proximity to the Matsuyama Sightseeing Port also gives easy access to ferries bound for Hiroshima, and the chance to travel by boat over the calm Seto Inland Sea. Hiroshima is universally known as the site of the world’s first atomic bombing on the 6th of August, 1945. However, despite the tragedy, the city of Hiroshima stands as a once again thriving and energetic place, but the terrible cost of war is not to be forgotten. A visit to the Peace Memorial Park is a moving experience, and a ‘must do’ for all visitors to this city, now known internationally as the City of Peace. In addition to the Atomic Bomb Dome, there are 35 memorial monuments in the Peace Park, including the Peace Flame and Peace Bell, as well as the highly informative and moving Peace Memorial Museum. After the bombing, it was said that because of nuclear radiation nothing would grow for 75 years in Hiroshima. This park, with its beautiful trees and flowers, stands testimony to the resilience of nature, a symbol of hope for positive change, and a place that embodies the goal of a world without nuclear weapons and the tragedy of war. A visit to Hiroshima offers the chance to see two World Heritage Sites in very close proximity, and there’s no better way to travel between these highlights than a relaxing boat trip. In only 45 minutes, you can travel directly between the Atomic Bomb Dome in Hiroshima Peace Memorial Park and Miyajima Island, home to Itsukushima Shrine and its famous vermilion gate in the sea. Not only is this the fastest and most efficient way to cover the distance between both sites, the boat journey itself offers a pleasurable way to take in Hiroshima’s river scenery, giving you a perspective often missed when traveling by road or rail. 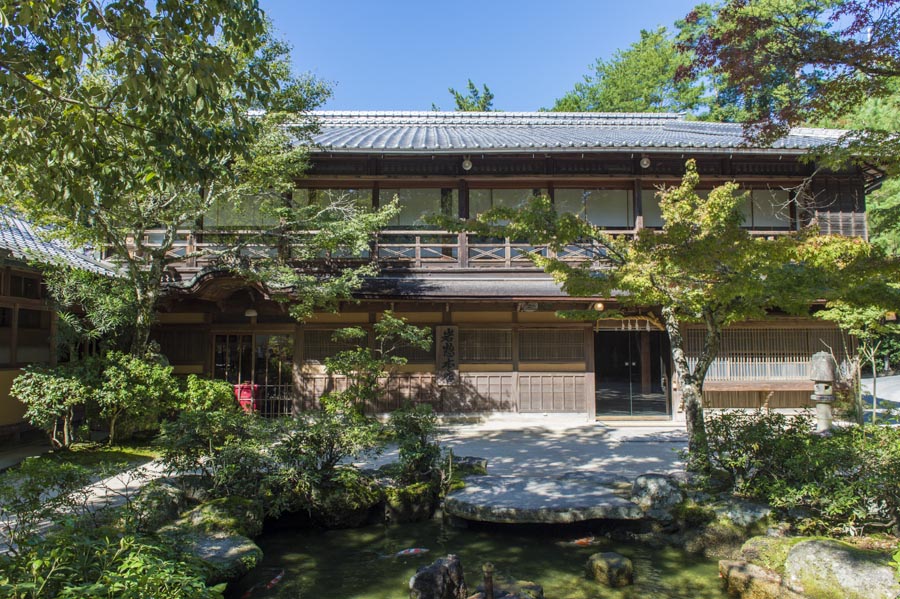 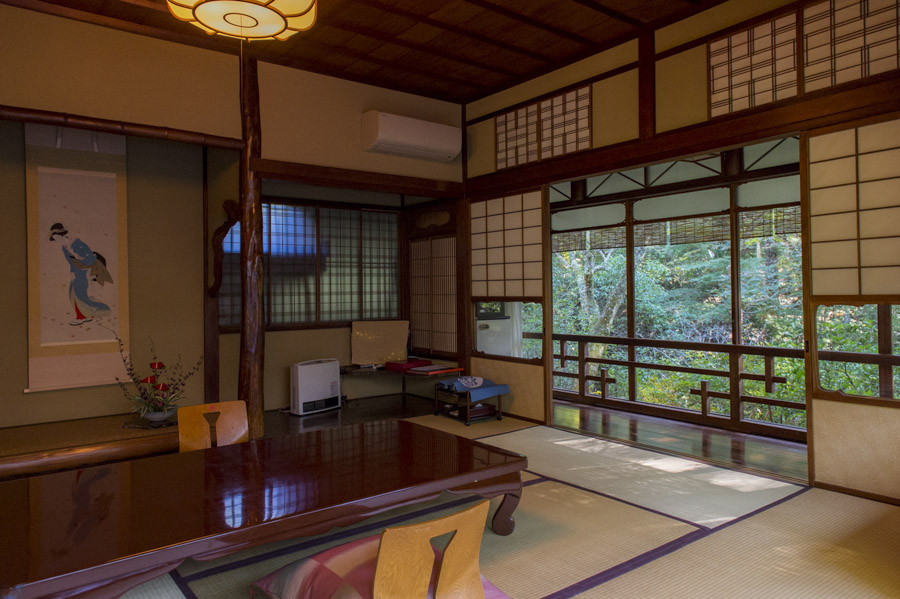 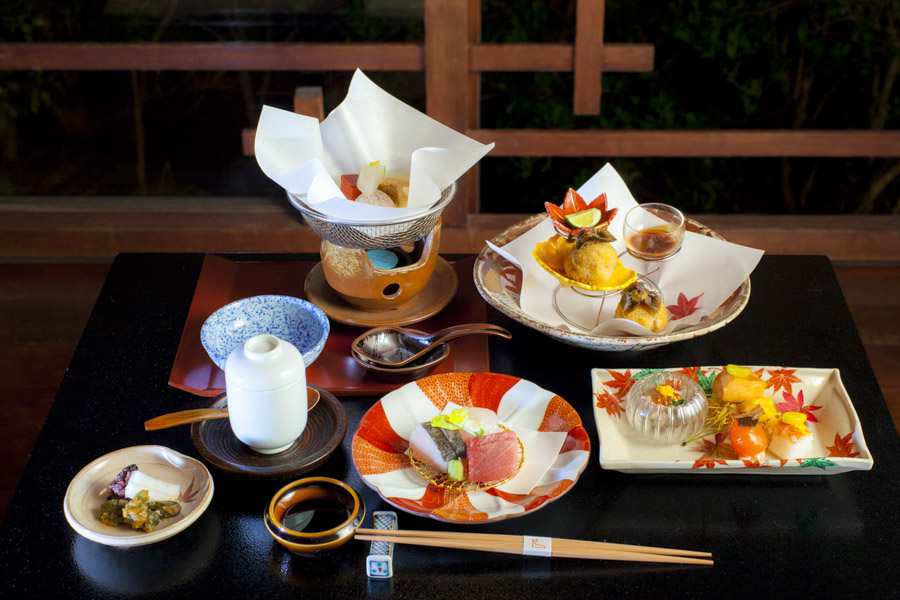 In 1854, what has now become the ryokan Iwaso first appeared as a teahouse suspended over a free-flowing mountain stream. A place for travelers to relax and take in the scenery after a visit to nearby temples. From such a humble start, Iwaso has grown to become a prestigious ryokan, attracting royalty and celebrities, as well as those wanting to indulge in a bit of luxurious old-world charm. A relaxed and soothing ambience permeates the entire facility, which operates with the discrete and silky efficiency found in only the very best ryokan. Whether you stay in one of the mountain-streamside cottages, or in a well-appointed tatami room in the main building, your stay is sure to include delicious fare from the sea and the mountains, along with a relaxing soak in one of the island’s few natural onsen. Conveniently located near the ropeway and walking trails to Mt. Misen, and a stone’s throw from the famous Itsukushima Shrine, it is an ideal place from which to make the most of your time on the island. If you’re on the lookout for extra memories, go on a five minute stroll down to the waterside to take in the famous torii gate reflected on the sea – it is truly a sight to behold. The origin of Joei-ji Temple dates back more than five hundred years, constructed by the famous samurai, Lord Masahiro Ouchi, as both a temple in which to pray for his mother in the afterlife, as well as an alternate residence. The temple is quite small, and of lower profile, but it does have something special. The temple’s Zen gardens were, reputedly, designed by Sesshu, a Buddhist monk, who is one of Japan’s most renowned painters and calligraphers. This pre-Edo era garden is an exploration in wabisabi, an ethereal Japanese concept best understood as an elegant refinement and organic beauty found in simplicity. The garden is divided into two parts, the stone inner garden, with its precision raked white pebbles, is a more familiar version of a Zen garden. Yet pass through the temple’s large Main Hall, and you’ll come to a stunning and spacious Zen strolling garden. The garden is an exemplar of Zen splendor, stripping away all that is unnecessary, as if creating a botanical version of one of Sesshu’s famous calligraphies using rocks, sparse vegetation, and water. The centerpiece of the garden is a pond designed in the shape of the Chinese character for heart. Traversing the walking trail which encircles this distinctive water feature takes twenty minutes, and provides completely different perspectives of the garden along its course, as well as the chance to marvel at the unique aesthetic sense that went into creating this unique garden. Legend has it that the healing properties of the water in Yuda Onsen were first discovered by observing an injured fox that emerged from the water with its wounds healed. While we may question the veracity of this story, what is not in doubt is the healing powers of the clear alkaline onsen water. In the 800 years since its discovery, Yuda Onsen has become Yamaguchi Prefecture’s premiere spa resort, well worth a visit for anyone wanting to rejuvenate a travel-weary body. There are more than 30 ryokan to select from in Yuda Onsen, but few have the ability to bring on a sense of deep relaxation on par with Kokian, an oasis of green in the heart of this popular resort town. The wide grassy areas for outside relaxing are a rarity amongst onsen, and the high ceilings and wide open public areas give a sense of space to the entire facility. The best, however, awaits within the private spaces, as some rooms have a spacious terrace and outside bath, while others boast their own tree-lined courtyard. Some even offer a miniature swimming pool. With the best of seasonal produce sourced locally, and a kitchen loaded with expert chefs, the multi-course kaiseki dinner is a gastronomic delight. As a special seasonal treat from October to March, you can even experience a full course of wild caught Tiger Puffer fish – surely a meal to remember. Yamaguchi City has earned itself the moniker ‘Kyoto of the West’ because of the sheer number of revered temples and historically significant sites within the city. A part of Japan historically ruled over by powerful feudal lords, their former presence has bequeathed the city with a deep cultural heritage. Headlining Yamaguchi’s culturally significant properties is Ruriko-ji Temple. Built in 1442, this five-story pagoda stands as one of the three finest examples of its type within Japan, easily earning its status as a National Treasure. Ruriko-ji Temple occupies Kozen Park, a magnet for visitors seeking the seasonal cherry blossom and autumn foliage. With the pagoda being nestled amongst trees, Ruriko-ji Temple provides ample opportunities to take your own iconic Japan snapshot throughout the four seasons, along with dramatic shots of the illuminated pagoda at night. Kozen Park also hosts an informative museum, and is the site of Chinryutei, a not-to-be-missed historical teahouse which served as a meeting place for the revolutionary samurai who secretly plotted to overthrow the Edo shogunate and bring Japan into the modern world. Shimonoseki in Yamaguchi Prefecture is home to Karato Market, one of regional Japan’s most vibrant open-to-the-public fish markets. The doors open at 5 o’clock in the morning, attracting not only traders and industry buyers, but also general customers that relish the chance of direct access to the freshest of the sea’s bounty. The scale of the site and diversity of the fish on sale also attracts large tourist crowds. While most tourists won’t be buying fish directly, having the chance to sample the morning’s catch in fresh sushi shops and market cafeterias is reason enough to visit. Open Friday through Sunday, and on public holidays, the market takes it up a notch with rows of stalls selling sushi and sashimi, deep fried Blowfish, and other regional delicacies. Given the early morning start, it’s probably best to stay close by overnight if you want to make the most of the experience. Only a short distance from the Karato Fish Market lies a striking temple overlooking the Kanmon Strait dividing the main island of Honshu from the Southern island of Kyushu. Although brightly colored, the temple was erected to commemorate a solemn occasion – the death of a child emperor in a sea battle, the result of which decided the fate of two clans – victor and vanquished – in 1185. The young emperor Antoku, desperately clasped in the arms of his grandmother, was to sink to his watery grave aged only six years old. First built in 1191, and last rebuilt in 1958, the large vermilion iron gate is modeled on the mythical underwater palace belonging to the dragon god of the sea, where the young emperor is presumed to have taken up residence. Inside the precinct are unusual features such as ponds dividing the outer and inner sanctum, rare artworks, and the graves of warriors fighting on the losing side of this decisive battle more than 800 years ago.