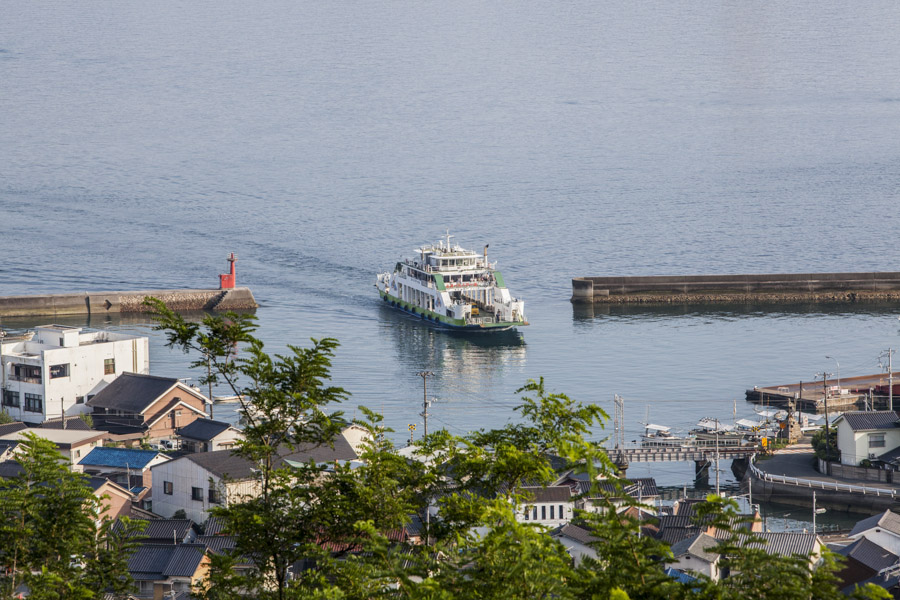 The ferry from Tadanoumi Port to Okunoshima – also known as “Rabbit Island.” 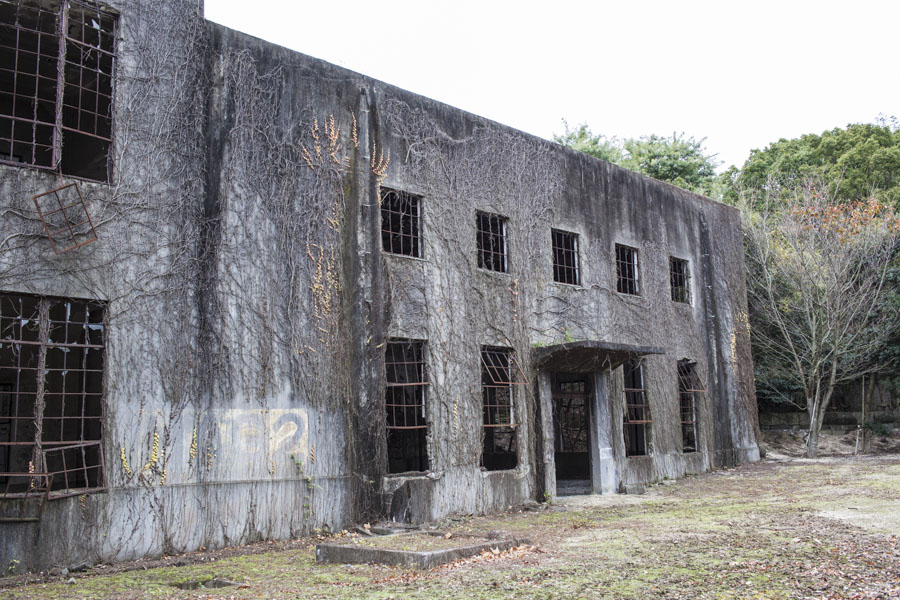 One of the remains of Okunoshima’s dark past. 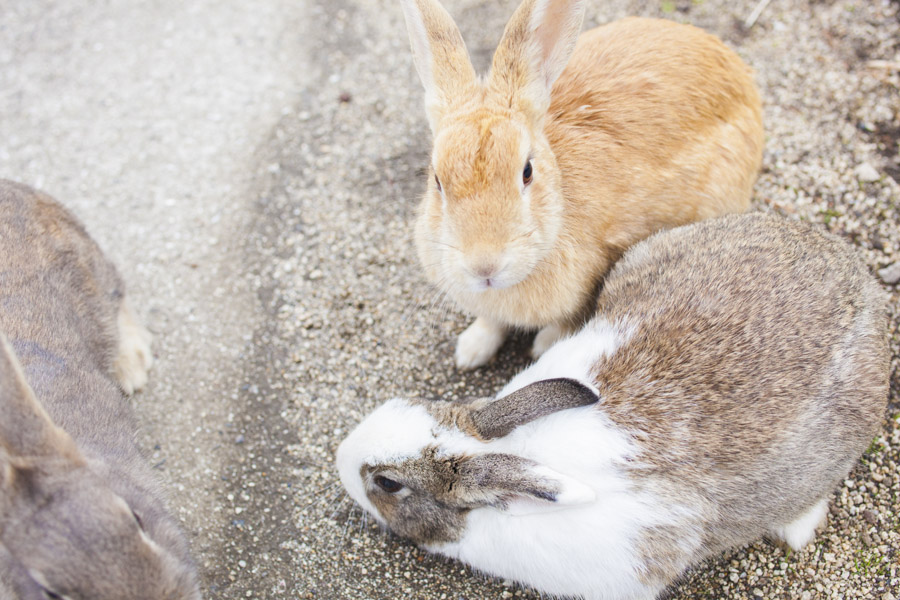 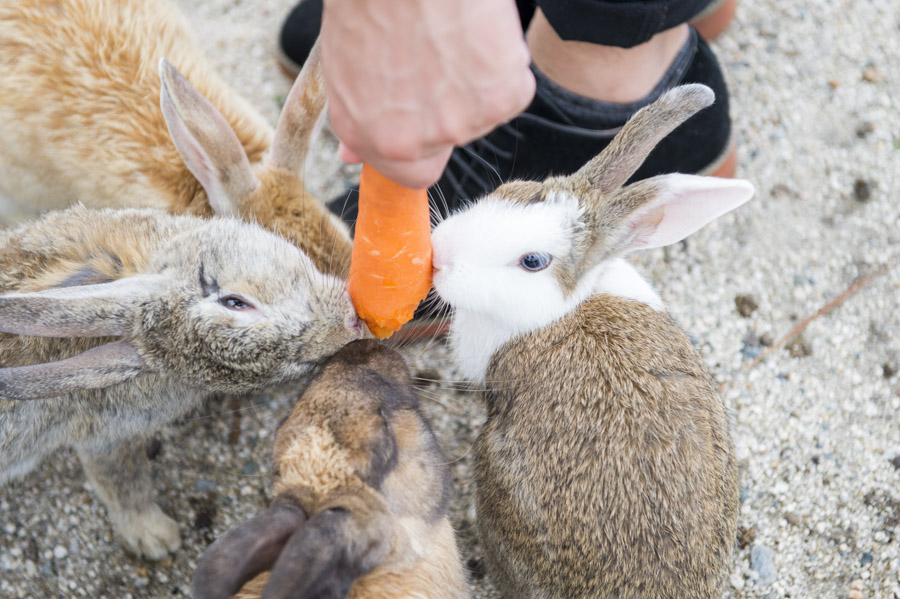 Remember to bring some carrots and cabbage for the rabbits. 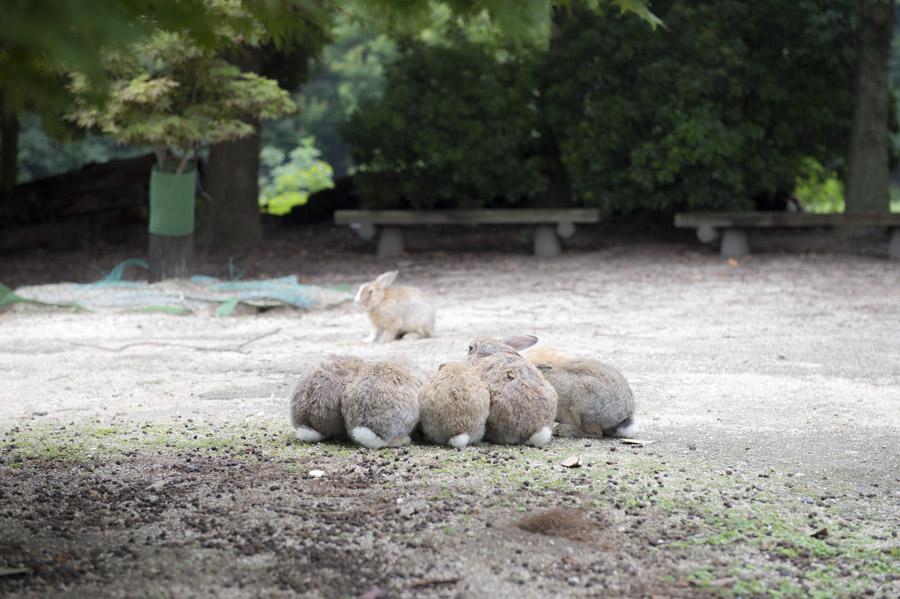 When I disembarked at Tadanoumi Station I knew I was heading for the same place as everyone else. Every year, over 100,000 visitors flock to the ferry port at Tadanoumi to sail the short distance across to Okunoshima Island – better known to the world as ‘Rabbit Island’.

Here, legions of adorable rabbits rummage and hop around every corner of this tiny island. The name ‘Rabbit Island’ should have prepared me for what I was about to witness, but I was taken aback by the sheer numbers of the furry creatures I encountered. Rabbits of all sizes and colors came to greet me as soon as I landed.

Buy some carrots and cabbage on the mainland to take to the rabbits. They’ll love you for it. As soon as I held out some vegetables, hordes of these furry creatures surrounded me in minutes. I’ve never felt so popular.

As I made my way from the ferry pier to the center of the island, I saw small diversions to satisfy the rabbit-lovers. One was an enormous set of ears that simulate how rabbits experience amplified sound. There was also an interesting visitor’s center with exhibits about the local wildlife.

During that time, Okunoshima was erased from all unclassified maps of the area. This top-secret facility produced thousands of tons of poison gas deployed to deadly effect in China, causing untold misery and horror. The remnants of the production facilities are still visible today and stand as monuments to a nightmarish past.

Okunoshima has not glossed over its history, but grappled with it head on. There’s an in-depth and at times harrowing Okunoshima Poison Gas Museum that details the history of poison gas production on the island. It also illustrates the ghastly effects of chemical and poison gas in war, both past and present.

The contrast between this history and the lovable, fluffy bunnies is huge, but maybe apt. Japan is a nation of strange contradictions and juxtapositions. The old and the new, eastern and western traditions cohabit every aspect of Japanese life. Something about witnessing herds of rabbits hopping freely among the crumbling ruins of military fortifications seems to fit into this kaleidoscope of modern Japan.

Aside from bringing a packed lunch, the best (and only) option for food on island is the hotel Kyukamura. It’s also where hardcore bunny lovers stay when one day on Rabbit Island just isn’t enough. In fact, the Kyukamura has a range of facilities, including a pool, tennis courts and a golf course. They also rent out bicycles, including motorized pedelec bicycles to easily move around the island. There’s also a popular campsite next to the sea, where you can pitch your tent next to a rabbit warren.

The benefit of an overnight stay is seeing the rabbits ‘out of hours’. Being nocturnal, the rabbits are more bouncy during sunrise and sunset. Combine this with the ‘golden hour’ light, and it all points to great rabbit photography. The perfect way to remember your experience with the perfect shot of these cute creatures.

Had your fill of rabbits and poison gas, but still have time before the next ferry? There are some good, quick hiking trails to the island’s observation deck. It’s good exercise to reach the top, and the panoramic view of the Seto Inland Sea from the summit will make up for the effort.

You’ll see posters on the ferries and at the piers giving you a thorough rundown of the do’s and don’ts of Rabbit Island. In case you want a heads up, here’s a quick overview of some of the rules:

• Avoid picking up rabbits or chasing them – you wouldn’t like it would you?
• Don’t feed the rabbits on the roads
• Don’t leave leftover rabbit food lying around – it’ll attract crows that aren’t so cute
• Don’t give rabbits human food – keep that chocolate bar away
• Be careful of the rabbits when you’re riding rental bikes
• Don’t take rabbits home with you – they like it on the island
• Don’t abandon your own rabbit on Rabbit Island – they don’t like newcomers
• If you take your car on the ferry, check under the car for rabbits


So follow the rules and enjoy your rabbit paradise. Be sure to take enough vegetables!